There’s this story how I liked 2PM. CLICK HERE! I wasn’t supposed to, but I fell for their hot bodies, cool attitudes, handsome faces and charismatic appeal. I have been seeing their music videos on MYX but it is only now that I appreciated them. All thanks to JYP’s DREAM HIGH.

My bias?! It’s no other than Ok Taecyeon! Who he was before and who is now, I love him. He has this ‘beastly’ look and talent but his true fans know that he is the most adorable k-pop idol ever!!! He’s jolly, funny and humorous. You’ll know it, just search a video of him on Youtube / UCC.

I also believe that since Jay Park left 2PM, Taec has been the acting leader of 2PM and he had received all the responsibility to promote his group, 2PM from then til’ now. He’s not just a rapper, but a singer. He’s an actor and an effective endorser.

Another thing among 2PM members, Taecyeon has the most number of controversies (an evidence of his popularity) to other girl groups like SNSD where he’s name was attached to 2 soshis; Jessica and Yoona. With Yoona, it was the loudest controversy and even named as scandal having a couple ring. Many wished for them to appear in We Got Married, but sadly, the issue faded without them being casted on the reality show. Recently, Taec was spotted having a coffee date with another Soshi, named Jessica in Japan. Both parties denied the issue with the statement that it is just a friendly meeting. He also had a slip of tongue on Strong Heart declaring that he knows Jessica’s number. He was also linked to another girl group and label mate, MISS A’s Suzy after being her leading man in the series Dream High.

Whoever he chooses to be his girlfriend, I won’t be like any other fan who’s bashing their idol. I will support him in his decisions especially when it comes to his love life. 🙂 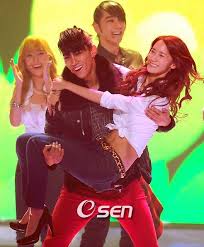 Lastly, I didn’t appreciate any rap song withing my 18 years of existence until now, because of this guy. He’s the best example of a ‘flattery that hasn’t chewed’. I swear to love this guy forever. He’s actually my most loved k-pop idol.

4 thoughts on “OK TAECYEON! A blog made for him and 2PM.”